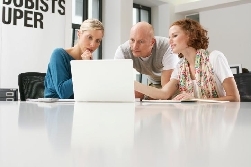 This diary reflects my beached bird surveys in Northeast England.

You may select any photograph to enlarge it.

A beached bird walk today uncovered three single, right wing primary feathers from adult kittiwakes and a single primary feather from the left wing of a short- or long-eared owl. The beach was very clean and the tide rising as people walked and exercised their dogs. Some more hardy souls were out in the water on surf boards while one enjoyed the surf in his short canoe.

This winter the Northeast England Beached Bird Surveys group is organising and carrying out analysis of some beached guillemots from recent years. We are following international protocols and especially investigating the issues of marine litter and pollution. The analysis is taking place at the Dove Marine Laboratory, Cullercoats, Tyne and Wear and is led by NEBBS group coordinator Daniel Turner. 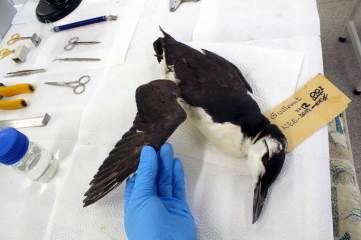 I carried out a two and a half hour beached bird survey along 1.5 km of the Northumberland coast. It was a foggy day. The month had been wet and reports were received of beached auks. Today’s survey unearthed remains of two guillemots, a puffin, common gull, pheasant wing and an eight-foot grey seal. A lovely snow bunting accompanied me for part of the survey. The photograph shows the upper shore in focus, with three pieces of plastic, blue and blue-green in colour, each a few millimetres in length. Such pieces are ingested by our seabirds on a regular basis. (Note and photograph by Daniel M Turner). 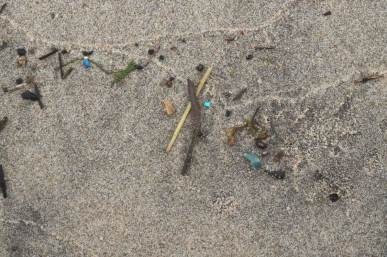 There was a beached bird (NEBBS) group table in the Natural Northumbria gallery at the Seas and Coasts hide in the Hancock Museum (Newcastle-upon-Tyne). The NEBBS group coordinator gave two 12 minute talks in the museum at 7:45 and 8:45 pm. Many visitors attended the stalls, explored the museum and talked with researchers.

From 12:30 to 3:30 pm the Dove Marine Laboratory (Cullercoats) was open to the public as part of a Heritage Open Day on Tyneside. Our beached bird group had a stall with several specimens on display and group coordinator, Dan Turner, was present to talk with visitors. It was a busy three hours which actually extended for longer as the last visitor remained to talk beyond closing time. Dan answered many questions and talked in some detail about the research. Some questions remained to investigate for a later response. 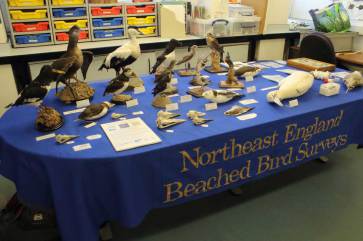 Had received an invitation to speak to Years 3 and 4 at Southridge First School, Whitley Bay. There were two groups of children, about sixty pupils or two classes in each, with whom to discuss our beached bird projects, an hour on each occasion. The children were keen and produced a barrage of questions. It was a great experience. The school was having a STEM (science, technology, engineering and mathematics) week and the talks fitted with this theme. 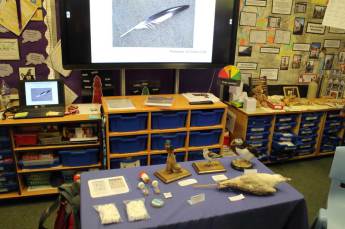 The Northeast England Beached Bird Surveys group held their 2019 meeting at the Old Low Light, North Shields fish quay. There was a good attendance with a dozen surveyors and another seventeen attenders who were either speakers or involved / interested parties. We listened and watched presentations from the St Mary’s Island Seal Watch volunteers, Mick Smith (a retired fisherman), the NEBBS Group coordinator, photographer Chris Heal and Greenpeace. It was a full and busy programme, but we had time for hot drinks and scones too! Please see our meeting photos below … a dozen surveyors and almost the complete meeting attendance. 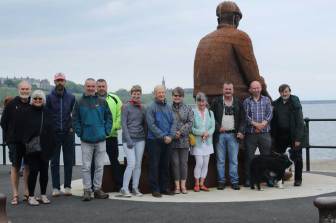 12 NEBBS Group surveyors at the mouth of the River Tyne 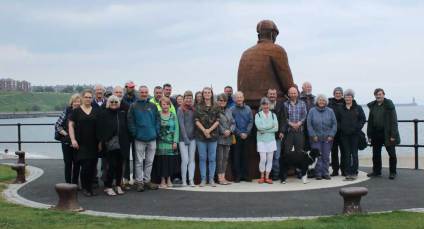 The Northeast England Beached Bird Surveys group was invited to have a display table today at the Star and Shadow Cinema, Warwick Street, Newcastle. What a great venue! Also a lovely bunch of volunteers! Our table was open to visitors from 2 pm to 5 pm and many came to see, listen and talk. Our presentation in the cinema, mid-afternoon, lasted around half an hour for young and older alike. Some interesting questions followed. Also during the day, artist Julia Barton, from NW Scotland, held workshops in relation to her littoral art project while there was a showing of the Australian documentary ‘Blue’ in the evening. 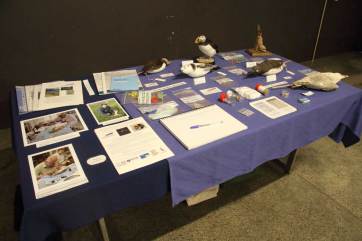 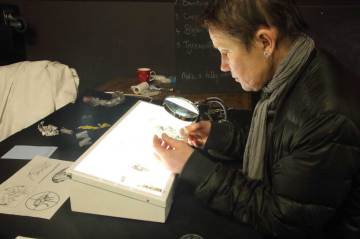 A dry day with temperature 12-14 C and rising tide while my beach survey was performed between 11 am and 2 pm. The shore was quite clean with a fairly light deposit of dead seaweed and presence of many flies. Live birds included a pied wagtail, carrion crow, three passing fulmars, herring gulls and northerly movement of sandwich terns. My beached bird finds, on southern section, comprised: guillemot skull with upper mandible and remains of a second guillemot (first-year in age) from which the exposed sternum was collected. 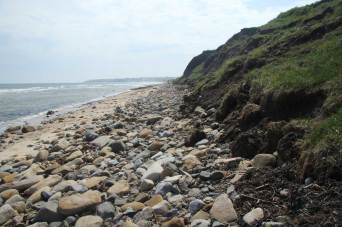 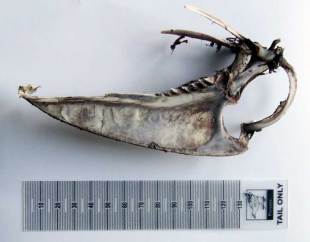 The photograph shows Michael Atkinson on the top floor at the Old Low Light, North Shields fish quay. He had readied the room for a Philosophical Enquiry involving meditation and mindfulness. The stimulus for the event was plastic in the oceans, so I had brought artefacts and gave a short presentation to help get things underway. It was a very interesting experience with a good group of people to talk about their ideas and consider what could be done to help resolve the problem. 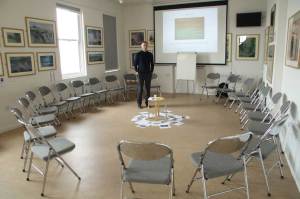 Michael at the Old Low Light for Philosophical Enquiry.

On a stretch of 1.5 km there were 14 recently beached guillemot corpses, three puffins, two razorbills and a pair of herring gull wings. I collected a complete adult guillemot and first-year puffin along with some bird bones. The poor weather (snow, easterly winds, rough sea and cold conditions) of the past fortnight has been taking a toll on our seabirds. All today’s auks were emaciated. 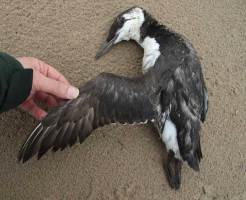 Remaining for extra days after the Fulmar Workshop, I received tuition from Susanne Kühn concerning fulmar stomach contents analysis. Susanne instructed on stomach flushing as well as sorting, cleaning, weighing and identification of the contents. She is working towards a PhD and carrying out research with Dr Jan Andries van Franeker at Wageningen Marine Research. 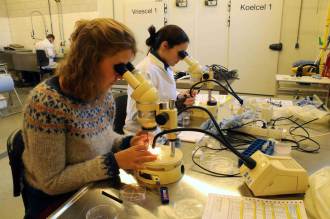 Attending this international workshop was most interesting. Attendees came from: Iceland (1), Norway (1), Germany (5), Holland (5), Belgium (4), Spain (2), Scotland (5) and England (2). The photograph shows our group at its maximum attendance by 25 people on Sunday, 18 February outside Wageningen Marine Research, Den Helder. We performed laboratory analysis on northern fulmars and Cory’s shearwaters, attended a discussion day and enjoyed some birding on the wonderful island of Texel. This workshop, the fourteenth since the first in 2002, was organised, as always, by Dr Jan A van Franeker. 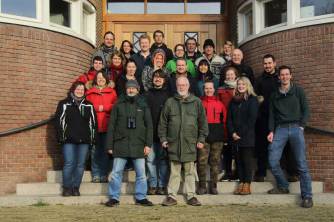 For my monthly Druridge Bay beached bird survey I was joined by Laura from Coast Care. We found the wing remains from an adult black-headed gull at the high tide strand line. The outermost primary feather of each wing was still in growth. One leg accompanied the find, which was likely a fox kill. The weather was bright, but cold with ice nearby. We also collected single moulted feathers from gannet, great black-backed gull, herring gull, kittiwake and curlew. The shore was relatively clean as we walked and the tide approached. A pair of bright and active stonechats accompanied us a while.

Two northern fulmars were processed at the Dove Marine Laboratory today with a range of tissue samples collected for the future. The bird shown here was an immature female. For part of the day we were joined by a film crew from the BBC ‘Inside Out’ series who came to record our findings and learn more. The work proceeded nicely. To help during the analysis we had Russell Davis on hand and two Newcastle University Masters students.

It was the Dove Marine Lab heritage open day and the beached bird group had been invited to have a table. I dropped things off on Tuesday afternoon and started to set up our display. Included were three of the specimens newly prepared by taxidermist Adrian Johnstone with a grant from the Northumberland and Tyneside Bird Club. Table set up concluded in the early morning before visitors started to arrive and tour the building. It was a great day with lots of visitors, of all ages, asking questions about the different bird projects. A wonderful, newly designed (by Gemma McGregor) and printed, colour poster was ready to include at our stand.

Beached bird and fulmar display in the

Three days in the Dove Marine Laboratory (Newcastle University) allowed initial processing of eight fulmars found dead in northeast England and eastern Scotland. Assistance came from members of our beached bird group surveyors. The seabird stomachs were removed for contents analysis, to be carried out in the Netherlands by researchers from Wageningen Marine Research as part of the ‘Save the North Sea’ fulmar project.

Beached bird surveyor Aurélie Bohan is shown assisting in the Dove laboratory on Tuesday, 16 May. Aurélie is employed by the Northumberland Wildlife Trust as Living Seas Officer. Together we worked on two fulmars, both found dead on the coast of Northumberland.

With an attentive audience seated, my presentation progressed on the theme of the beached bird and fulmar projects in northeast England and beyond. Outside the weather was bright and sunny, but a little on the chilly side. Those attending came up with a variety of questions which I attempted to answer. We concluded with a short presentation about some of the birds of the river mouth. There were newsletters for browsing and an information sheet to take away. One of the birds on display was a very smart immature drake eider which was staying with me for a few short days. 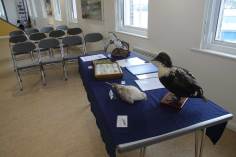 It was a grey day with a drizzly morning as I started my Druridge Bay beached bird survey on 29 March. Three guillemots were found – an adult and two first-year birds. Other finds comprised black-headed gull and kittiwake, but neither was quite complete and both had been dead for several weeks. There were also three or four rabbit carcasses.

I organised a bird and shore display at the Old Low Light (North Shields fish quay) on Wednesday - Thursday, 22 - 23 Feb 2017. This was in the heritage gallery where I talked with visitors. We discussed such subjects as birds of the shore, Tyne birds, nesting gulls, fulmars in the North Sea and beached birds. Visitors were shocked and surprised by the extent of the effects of marine litter and pleased to hear about our study and its aims to improve the marine environment.

The little auk is a winter visitor from the arctic to the North Sea.

There were two first-year puffins on Tynemouth Longsands to be collected on Sunday 19th. Prof Mike Harris reported to me that the only other UK beached puffins of which he was aware this winter were three from Orkney i.e. two first-year and one second-year bird. On both Tynemouth Longsands (19th) and Whitley Bay beach (20th) very many white cuttlebones were to be seen at the uppermost strandlines. I do not recall seeing as many cuttlebones here in the past 14 years.

One of two first-year puffins found today and collected,

Two common cuttlefish cuttlebones and part of a whelk shell,

I found no bird remains to speak of. During my Druridge Bay survey I watched a bright pair of stonechat and spotted the body of a rabbit. Whitley Bay beach produced some icicles at the base of the cliffs as I recorded six lively rock pipits and two meadow pipits feeding amongst the shore detritus with turnstones and sanderlings too.

Coal dust on the sand,